How to explain the tremendous success of his former Bulldogs on the PGA Tour:

“Great coaching,” he quips as a faux brag, but it is a valid response.

Since 2008, 11 of his former players have won a total of 44 titles on the PGA Tour, from two-time Masters champion Bubba Watson with 14 victories to Savannah native Brian Harman with three to the latest UGA alumnus to earn his first, Sepp Straka, on February 27 at the Honda Classic.

Again, the line’s been used before, but that doesn’t make it any less true.

“I really can’t explain it,” Haack said, “other than the fact I feel we’ve put them in an environment that helps them to get better and understand how to get more comfortable on the golf course and handle pressure and all the psychology of the game that we try to influence on them a little bit.

“Somehow, it seems to work.”

This pipeline from UGA to the PGA — with former Bulldogs playing professionally on other tours such as the Korn Ferry — hasn’t always worked this well.

Haack became the Georgia coach in July 1996 and would be inducted into multiple halls of fame for an unmatched run in the program. There have been two national championships, eight Southeastern Conference crowns, and more than 60 team tournament titles.

The knock, and that’s a stretch, was that for all of its talent over the years, Georgia didn’t produce a commensurate number of PGA Tour players. Before the Haack era, UGA had produced five winners on the PGA Tour: Chip Beck (four victories), Terry Diehl (one), Bill Kratzert (four), Peter Persons (one), and Tim Simpson (four).

“That’s how other schools would negatively recruit against Georgia: ‘Georgia gets all of these great players and none of them end up on the PGA Tour,’ ” said Harman, 35, a 2009 UGA graduate. “I’m just so happy to be part of the generation that changed that. Now every time any of us come up on TV, that’s what comes up, all these Georgia golfers.”

Harman credits Haack for building and sustaining a program so strong, “it sort of recruits itself.” 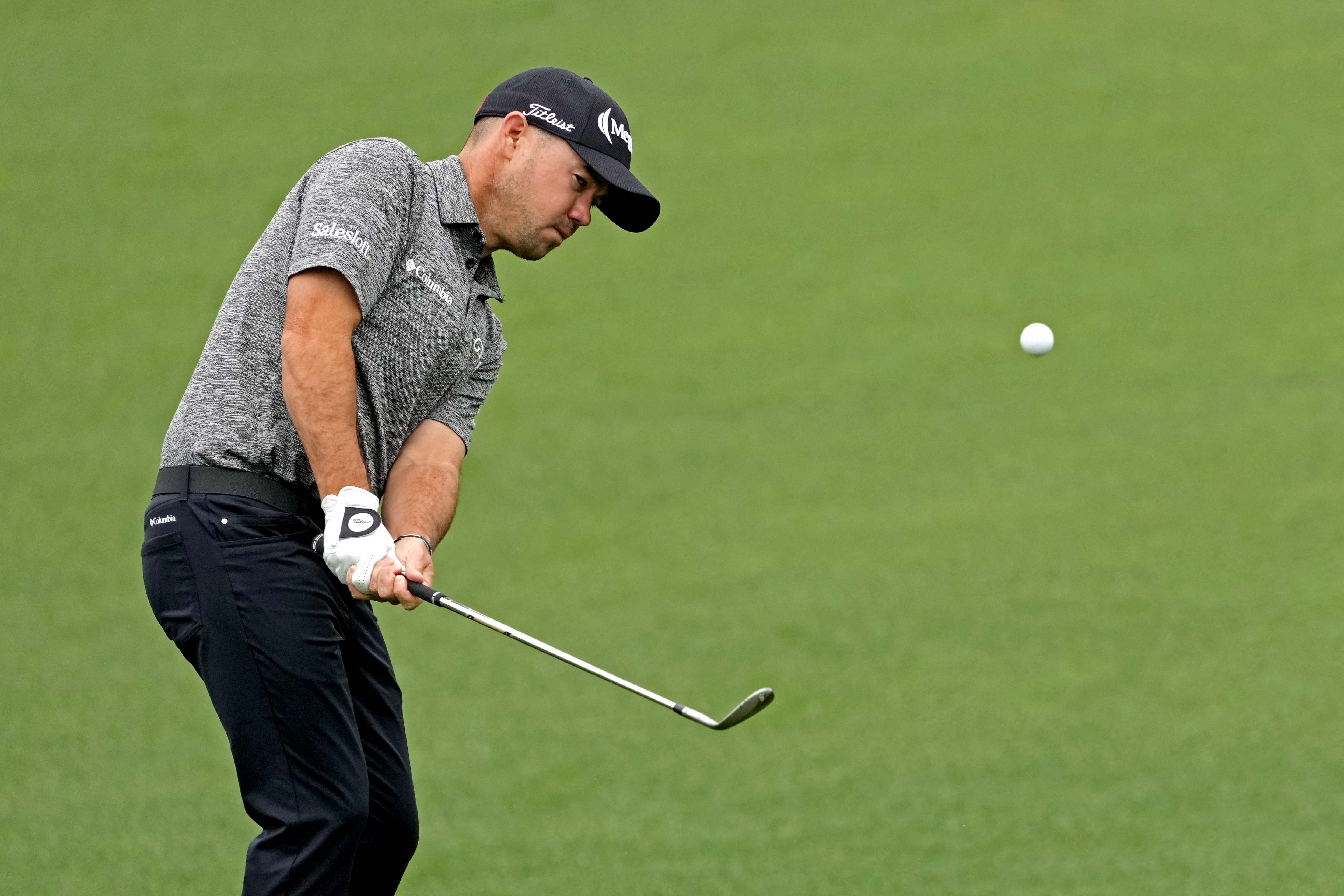 Brian Harman chips on the second hole during the first round of the 2022 Masters Tournament. (Photo: Michael Madrid-USA TODAY Sports)

Having been around the sport a long time, Haack remembers when UGA had very good players who didn’t pursue professional golf, choosing other careers. Haack views it not as a failure but another era, when the tour wasn’t so lucrative and there was a different culture on college golf teams.

Don’t expect Haack’s program to produce “cookie-cutter” golfers. It’s quite the opposite.

“They didn’t try to make us play a certain way,” said Spencer Ralston, 24, a 2021 UGA graduate now on the Korn Ferry Tour. “I think the greatest thing that they did when we were in school was they gave us the flexibility and everything to go out and play well.”

Ralston said the program has the resources, from the facilities to the tournament travel experiences, to allow the golfers to flourish, have fun and build confidence in their games. 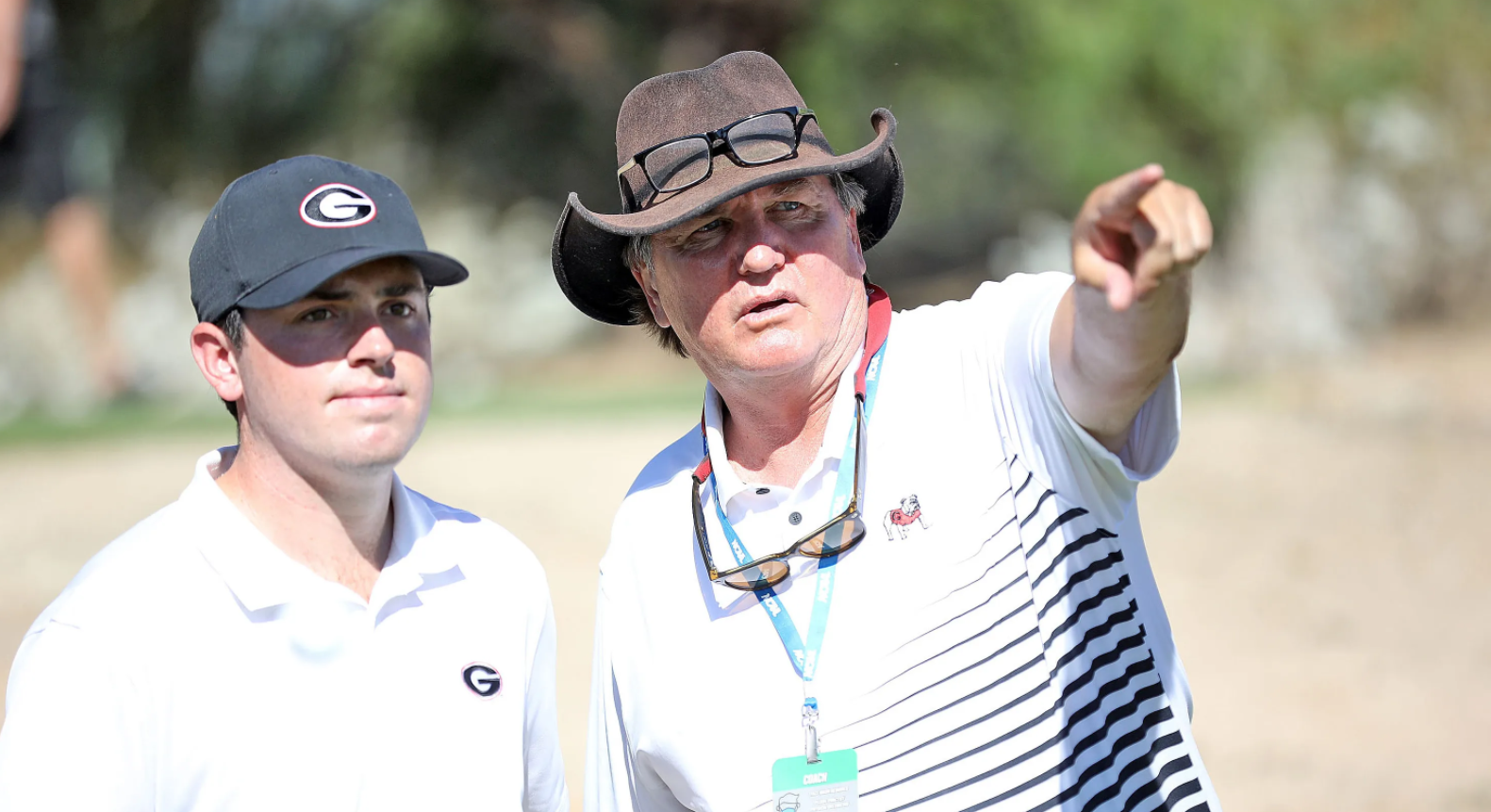 Georgia’s Spencer Ralston, left, with men’s golf coach Chris Haack during the second round of the NCAA Championships at Grayhawk Golf Club in Scottsdale, Arizona, on May 29, 2021.

A team captain for two years, Ralston enjoyed it so much that he played five years with the bonus year granted by the NCAA for COVID-19’s impact.

“Each year I think you can see I grew more and more as a person and became a better player,” Ralston said in an interview during the Club Car Championship at The Landings Club.

Every golfer is unique

Golfers are going to be different, Haack said, from their swings to their personalities.

“What it boils down to is what are your natural tendencies when the pressure’s the greatest?” Haack said. “When all the eyes are on you coming down to that 18th hole, you’re going to go and do whatever is natural or easiest or most comfortable.”

This is where Haack the golf coach and sports psychologist are one.

“We’re not a big cookie-cutter group where we’re all trying to do the exact same thing,” he said. “What we try to do is put them in a situation up here (in Athens) with the way that we qualify and the way that we get guys going to tournaments, so they get comfortable in their own skin of what works for them in those situations. We make them reinforce that over and over and over so that it just becomes part of their natural regimen.”

Haack referred to “the way that we qualify” for tournaments. It’s the game within the game that former UGA golfers said sets the program apart. The coach doesn’t pick the five golfers who will compete for UGA in a tournament. The golfers basically determine that.

The “best” golfers — the ones with the biggest names, most accolades, highest ranking, etc. — don’t represent the team unless they perform the best at the team qualifier leading up to a tournament. Just like in the pros.

The team has a qualifier of at least three rounds — simulating a tournament — usually at the UGA Golf Course, Athens Country Club, and Jennings Mill Country Club in Watkinsville. Sometimes it’s up to six rounds, depending on the time between tournaments.

They are still teammates and friends, but the competition is fierce as they play for the available spots. They also can secure a spot with a top-10 individual finish at the most recent college tournament, then still go through qualifying to “bank” a future spot.

Also, if the Bulldogs win a tournament as a team, Haack may stick with the same five to build chemistry as long as each contributed to the victory. If there was a weak link, there’s a spot open.

Sticking with the plan

Everyone knows the drill from the start. Haack and associate head coach Jim Douglas are consistent, even if they cannot anticipate which golfers will get hot or which newcomers may break into the lineup.

“You did all the work at home,” Ralston said. “When you got to a tournament, you’re relaxed, you have fun, you go out and play to your potential.”

The golfers may be different types, but they shared “a similar mindset where we weren’t afraid of competition,” Harman said. “We wanted to challenge each other. We had a really good environment for making everyone better.”

Harman, a star at Savannah Christian as well as in junior golf on a national scale, recalled that when he arrived at UGA, he was the top-ranked amateur in the world at 18.

Haack told him to qualify for his first tournament as a Bulldog, and that never changed.

“There were no passes given,” Harman said. “It just builds grit and resiliency. As many times as I argued with Haacker, ‘Why are we qualifying? We know how the team’s going to be,’ we always had to figure it out and go shoot a score. That’s what the tour’s all about.”

There’s no special treatment, no excuses, no throwing out a bad round. Every score mattered.

“The hard qualifying sort of hardened us for that life,” of a professional, Harman said.

Haack said that in his 26 years at UGA, only three players had never missed a tournament: Harman, Henley, and Kisner.

The better golfer is the one with the lower score, and Haack likes to keep it “cut and dried.” He doesn’t protect golfers or play favorites.

“That’s what we play for; we play for scores,” he said. “It’s not about who hit it really good but didn’t make any putts. It’s about scoring. That’s the game.

“It’s not about who hits it far, who hits it straight, who’s got the best chipping stroke. It’s about the score. That’s what wins and loses money on the PGA Tour. We just ingrain that in them pretty early. That’s what it’s going to be like the rest of your life, so you might as well get used to competing every day.” 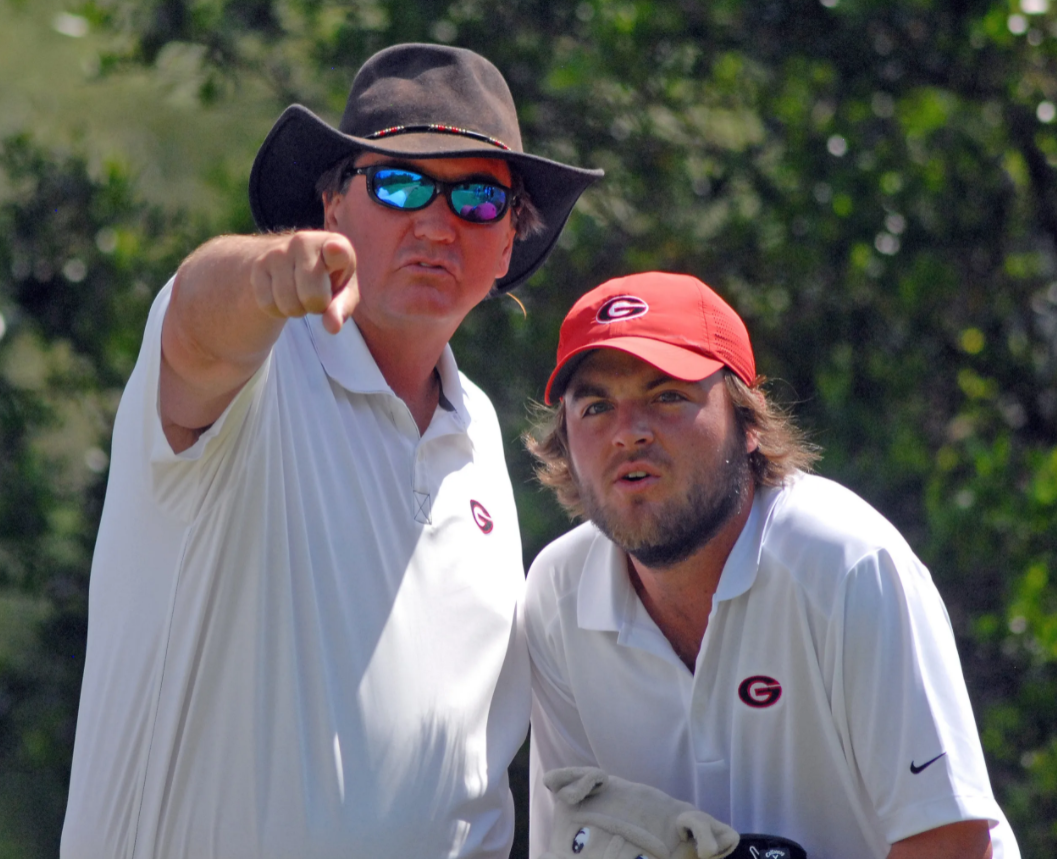 Joey Garber, 30, plays on the Korn Ferry Tour and was in Savannah for the Club Car Championship. The 2014 UGA graduate is often asked, including from his peers, about so many Bulldogs in the pros.

When he explains about the competition within the team, rather than the coach arbitrarily selecting the lineup, they understand.

“I think that’s pretty rare for a coach to put his butt on the line and do it that way,” Garber said. “I think a lot of coaches are more comfortable picking their lineup, putting their best players out there. But (Haack) has done a good job recruiting. He has a deep enough squad that he’s allowed to do that and trusts all of his players that qualify will play well. It definitely starts from there.

“It prepares you because nothing’s given to you in this game,” Garber continued. “When you turn pro, you’re on your own. I learned that a little bit the hard way. That’s the way he gets you ready to play on the PGA Tour, and I think that’s why you see success out of so many Georgia players.” 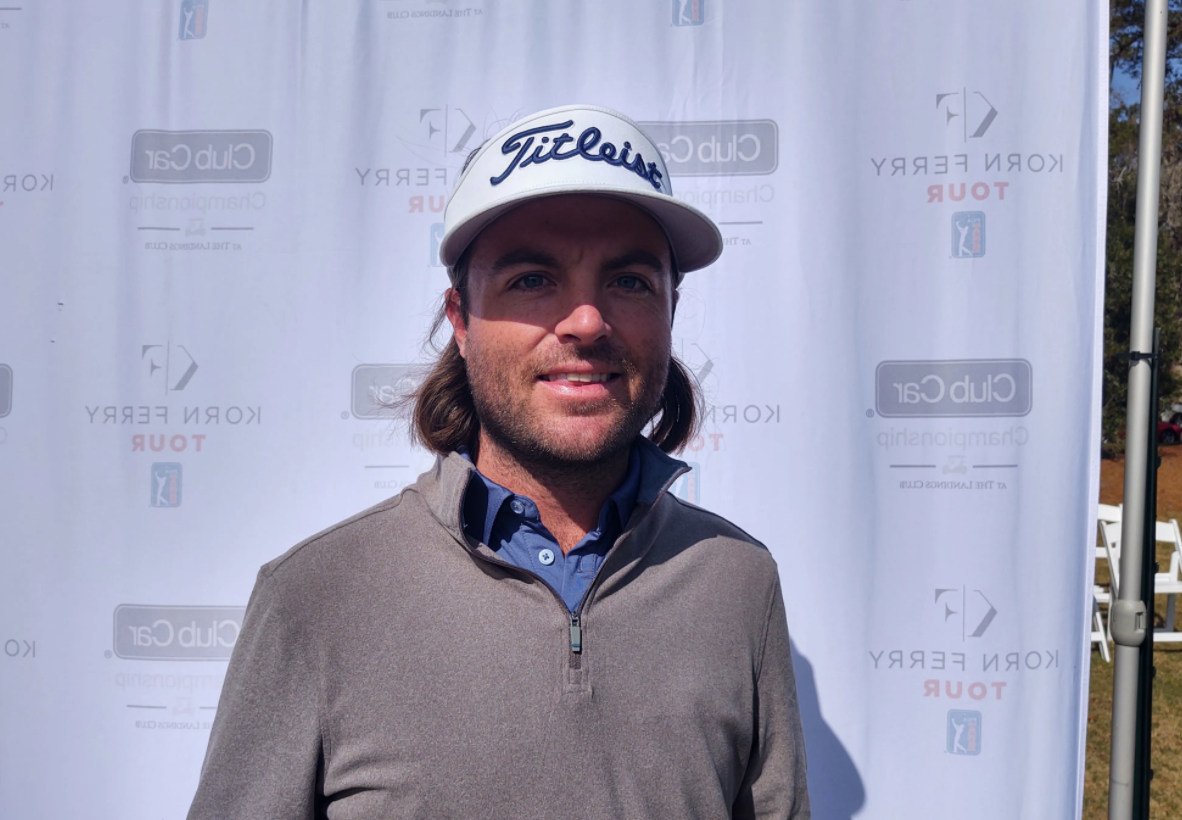 It’s not a perfect system. Garber was the No. 1 player in college golf when he failed to qualify for an event. There was room for other players to compete as individuals — on other teams this would usually be the sixth- or seventh-best player in the coach’s view. So Garber came along and won the whole thing. That didn’t help UGA’s score.

“I think our coach took a little bit of grief for that,” Garber said. “That’s just the nature of the beast. I didn’t have any qualms about it, nor would, I think, any of my teammates. That’s just the atmosphere and culture he creates. You want the best for everyone.” 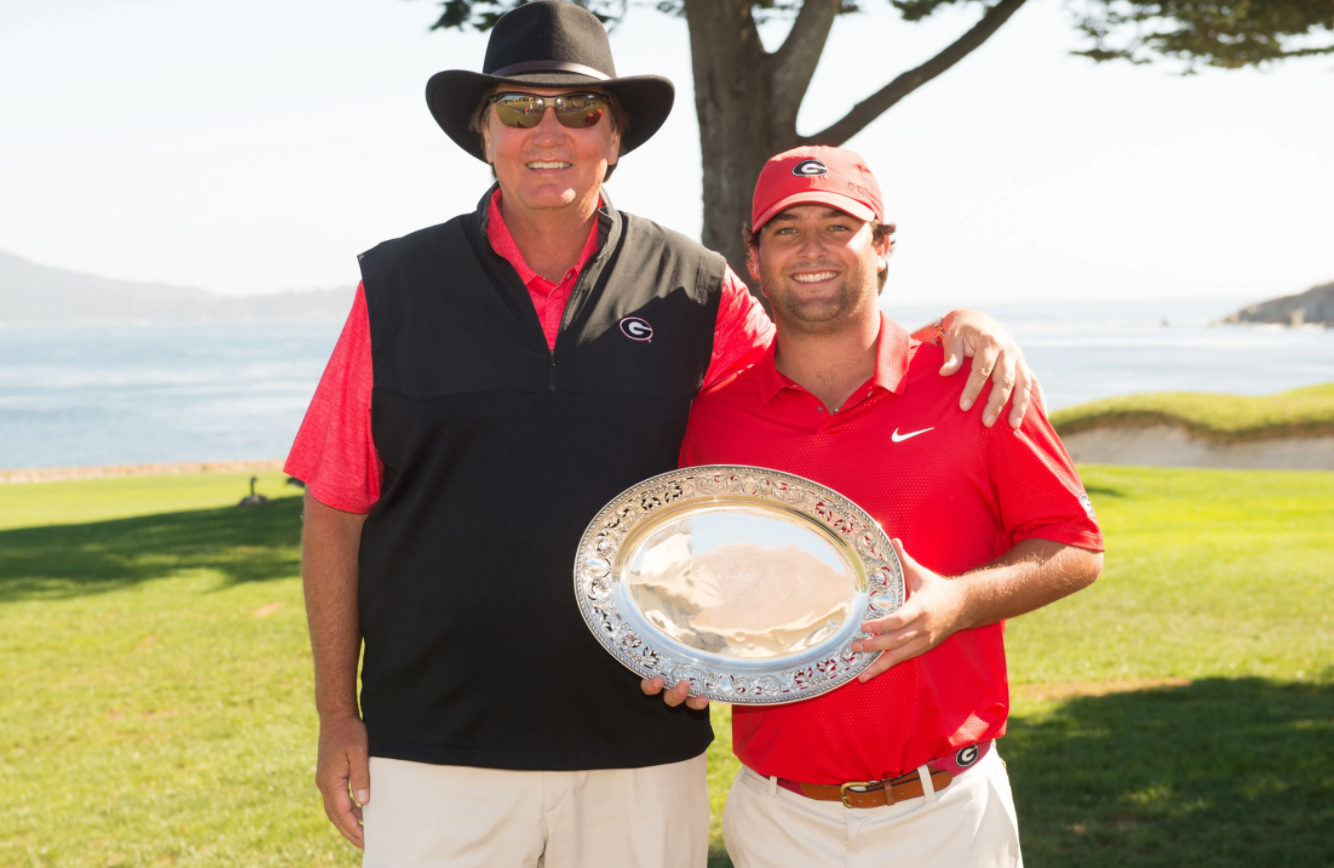 The UGA golf fraternity continues on the PGA Tour as they remain friends and socialize, particularly those among the many pros residing on St. Simons Island. Garber said he moved there in part because of the opportunity to sharpen his skills in practice rounds against fellow islanders who happen to be among the best players in the world.

Haack keeps up with how his former players are faring on the pro tours.

“I’m probably pulling harder for Greyson Sigg than anybody right now,” Haack said. “I want to see him win as much as he can possibly win — only because he’s marrying my daughter.

Nathan Dominitz is the Sports Content Editor of the Savannah Morning News and savannahnow.com. Email him at [email protected] Twitter: @NathanDominitz

how to get a business loan