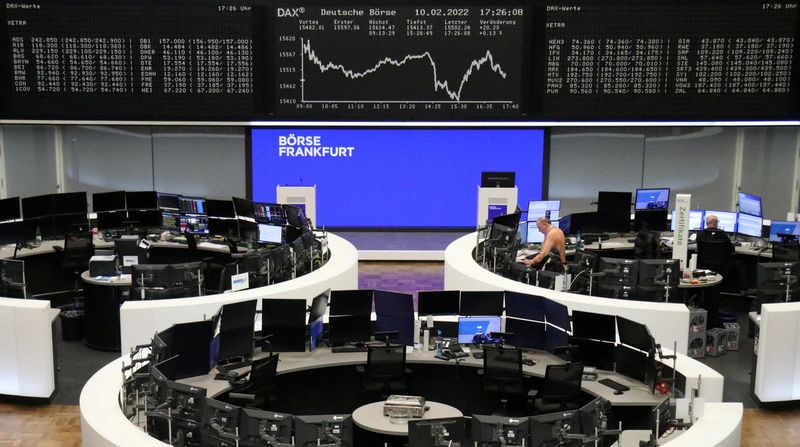 (Reuters) -European shares ended at their lowest level in 20 days on Monday, with travel and banking leading the slump as investors fretted over geopolitical risks following warnings that Russia could invade Ukraine at any time.

The Europe-wide index fell 1.8% – its worst single-day fall since Jan. 24. All the major sub-sectors were in the red.

Banking shares led declines, down 3.3% after sovereign bond yields across the euro area fell as investors rushed back to safe-haven debt on Russia-Ukraine tensions.

However, Ukraine hinted at possible concessions to Russia, helping alleviate some friction between the two countries, while Russia’s Foreign Minister Sergei Lavrov suggested to President Vladimir Putin that Moscow continue on diplomatic paths.

Global investors dumped riskier assets and moved to safe-havens such as gold and government bonds after a warning from the United States that Russia could invade Ukraine at any time.

“When it comes to the Russian issue, it is very difficult to say whether the markets are overreacting or not,” Matt Siddle, portfolio manager at Fidelity Investments, said.

“You’ve two big uncertainties. It’s not entirely clear what the Fed policy is. It’s a tightening policy, but it’s not clear how far and quick they’re going to go, and there’s also geopolitical uncertainty with Russia.”

A gauge of volatility in European equities spiked to 30.05 points – its highest since Jan. 25 when global markets sold off on concerns over higher interest rates and valuations in the technology sector.

Some of the Russian-exposed European banks including Raiffeisen Bank International, Unicredit (MI:) and Societe Generale (PA:) fell between 4.2% and 6.1%.

Airlines were also hit hard, with shares of WizzAir, British Airways-owner IAG (LON:), Germany’s Lufthansa and Air France KLM down between 3.3% and 6.3%.

Dutch airline KLM, part of Air France, said on Saturday it will stop flying to Ukraine, while Lufthansa was considering suspending air traffic in Ukraine.

The STOXX 600 has fallen 5.5% so far this year, while New York’s is down 7.5% as fears around quicker U.S. rate hikes and geopolitical concerns knocked investor confidence. Both the indexes started the new year at record highs.

Among other stocks, Clariant slumped 16% to the bottom of STOXX 600, as the Swiss speciality chemicals group delayed the release of its 2021 results due to an investigation into accounting issues.

Commerzbank (DE:) fell 2.7% after Germany’s finance minister said the government would not keep its stake in the lender in the long run.